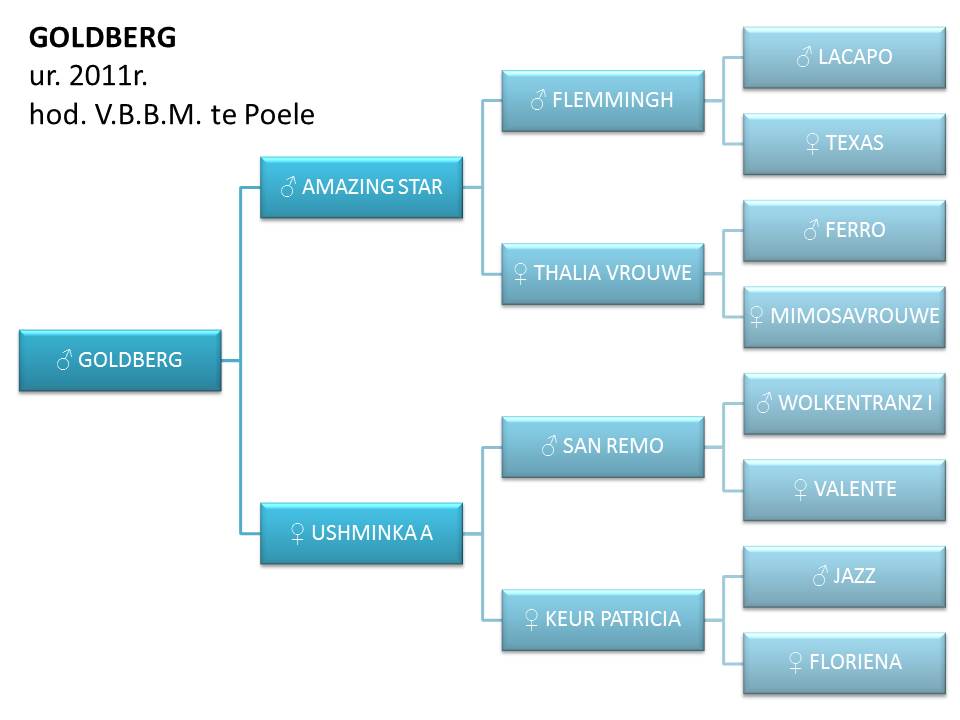 Offspring
Goldberg celebrated a grand debut in 2017 as father to stallions: four of his sons were licensed, one of which went to the premium ring of the best of the year.

His super modern foals are advancing to celebrated show winners who trotted in the end ring of the German foal Championship and were the top priced auction horses.

Performance Record
Goldberg started his young career at foal auction in Dronten, where he had the highest price tag. 2013 he was celebrated 2nd Reserve Champion of the Westphalian licensing. He completed his stallion performance test in Neustadt/D with scores up to 9.25 and a total of 8.52 as one of the best in his field.

He turned his first starts in riding horse tests in superior victories scoring 9.0. He superiorly won under Hubertus Schmidt the qualification for the National Championships of young dressage horses, which he was not allowed to participate in, due to his Dutch brand mark.

Pedigree
Goldberg’s father is the up to Grand Prix Level trained Pavo-Cup-winner Amazing Star, who combines the dressage giants Flemmingh, Ferro and Donnerhall in his pedigree and who is closely related to Glock’s Undercover/Edward Gal/NED.

His dam, elite mare Whoopy Goldberg, is also the dam of a ‘ster’ mare named Coco Chanel, who has placed in dressage classes up to Inter I level.

Goldberg owns no red factor; hence he is not able to sire chestnut foals.

PROGENY IN OUR BREEDING
2015 – Kuantan after Kleopatra (Samurai M)