In 2018, our herd was enlarged by three foals by L’Esprit and Zinedine as well as three mares.

In 2017, another mare-mother joined our herd.

In 2016, our herd was enlarged by three foals after Cordess and Marino.

In 2015, our herd was enlarged by a foal after Goldberg and a new mare.

In 2014, our herd was enlarged by two foals by Zinedine and Opan.

In 2013 roku our herd was enlarged by a foal after Bolshoi and mare.

First foal after Zinedine in our horse breeding was born in 2012.

Prior to World War II, there were two types of utility horse in the Netherlands: Gelderlanders bred in the south under the Gelderlander Horse Studbook (1925) and the Groningen bred in the north under the NWP (1943). The Groningen was, and still is, a heavy-set warmblood horse very similar to the Alt-Oldenburger and East Friesian. The Gelderlander was a more elegant variation, often serving as a carriage horse in addition to a useful draft horse. While the Groningen were almost unwaveringly solid black, brown, or dark bay, the Gelderlanders were more often chestnut with flashy white markings. These two registries merged to form the Royal Warmblood Horse Studbook of the Netherlands (KWPN).

After the Second World War, the Gelderlander and Groninger were replaced by tractors and cars, and horses began to become a luxury rather than a necessity. As early as the 1950s, stallions like the French-bred L’Invasion and Holsteiner Normann were imported to encourage a change in the type of Dutch horses, followed soon after by the Holsteiner Amor and Hanoverian Eclatant. The carriage-pulling foundation stock contributed their active, powerful front ends and gentle dispositions to the Dutch Warmblood.

Today the KWPN comprises four sections: the Gelderlander, the Tuigpaard or Dutch Harness Horse, and riding horses bred for either dressage or show jumping.

KWPN Horse Breeding in Pieńki started in 2011. First inseminated mare was Kleopatra, that I started with in eventing. 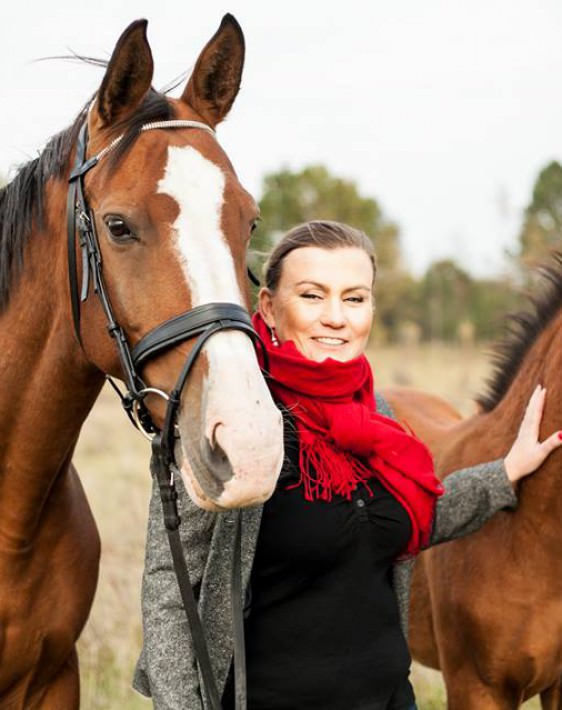